If you are on the fence about chemtrails – this article might convince you:  One factor that’s commonly overlooked when it comes to talking about human health and environmental degradation is geo-engineering and Solar Radiation Management (SRM), also known as “chemtrails.” The name seems to come from the fact that various geo-engineering and SRM programs use stratospheric aresols like barium, nano aluminum-coated fiberglass [known as CHAFF], radioactive thorium, cadmium, chromium, nickel, desiccated blood, mold spores, yellow fungal mycotoxins, ethylene dibromide, polymer fibers and more.

Below is a video of multiple scientists, doctors and pilots telling the truth about “chemtrails.” It’s a very serious issue that’s often ridiculed and thrown into the conspiracy realm. As a result I attached information from an article I recently wrote about the

Below is information taken on the same subject that we recently published. I attached it to substantiate the claims made in the above video to give it more substance.

“The US Navy launched a weapon capable of inducing a powerful earthquake on Haiti. This time it was only a drill, and the final part of it is destroying and taking over Iran.” -Hugo Chavez, (then) president of Venezuela

Weather modification dates back to the 1940′s, when the General Electric Company demonstrated that a cloud of super-cooled water droplets could be be transformed into ice crystals when seeded with dry ice. Shorty after this it was discovered that fine particles of pure silver iodide with a crystal structure similar to that of ice were effective for global weather modification. As a result: The above statement was made in the 1970′s, but so much more has happened since. With silver iodide began the birth of spraying stratospheric aerosols into the Earth’s atmosphere. Silver iodide spraying began in the 1950′s (1), and has since proven to be extremely toxic, especially for the environment, human and animal health. You can learn more about it here. 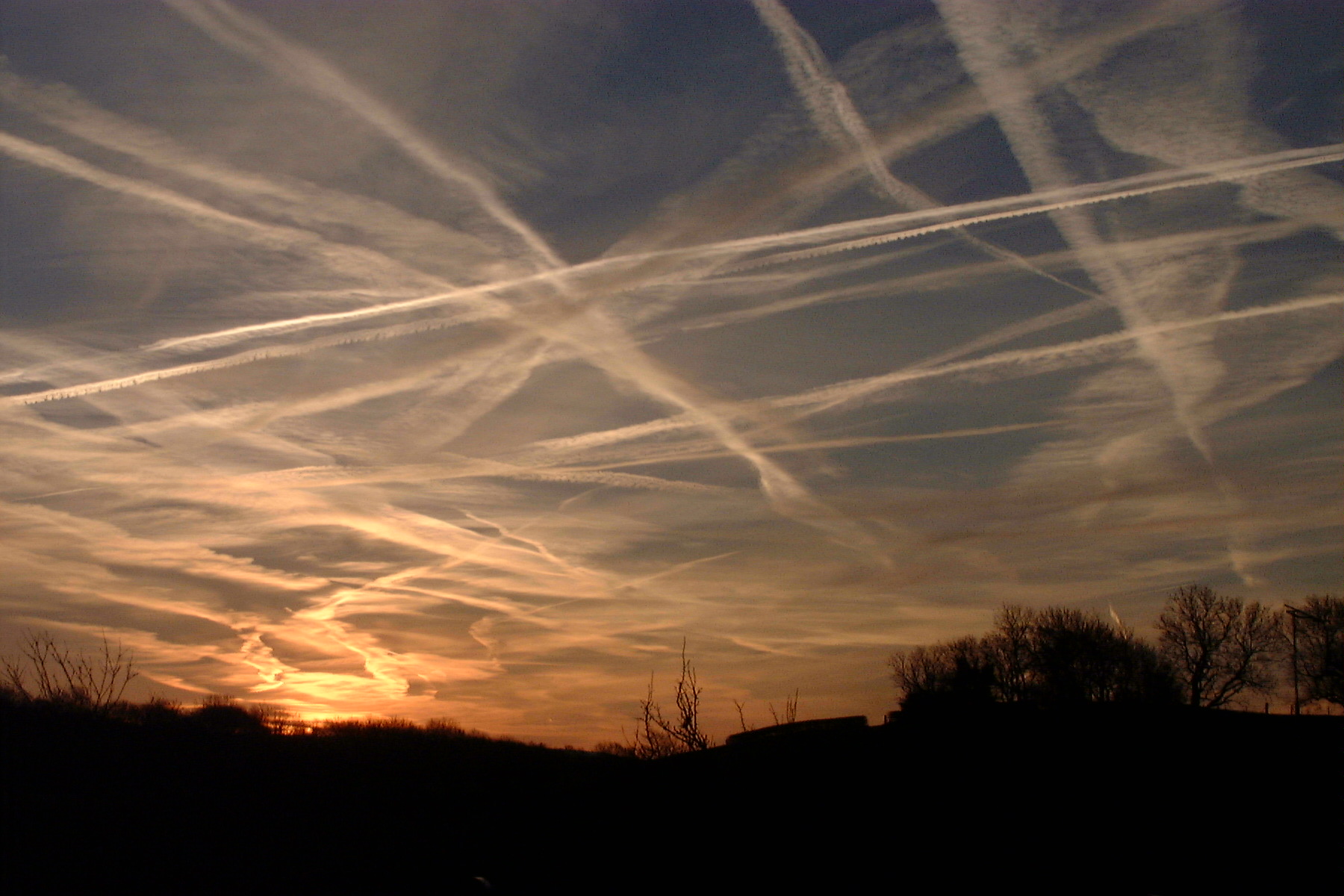 Aluminum is another thing. It’s highly toxic and also very damaging to the environment.

The idea of spraying aluminum into our atmosphere goes way back, patents exist that clearly demonstrate the consideration of such materials that include the oxides of metals which have high emissivity. These include harmful substances like aluminum oxide and thorium oxide. A great patent example is one from the Hughes Aircraft Company that dates all the way back to 1990, that’s over twenty years ago. You can take a look at it here.

Fast forward to today, with even more chemicals added to the mix, this gives us the basic gist of geoengineering programs (image below) and why so many people are concerned about them.

“We do stuff in the stratosphere all the time off-course, so it’s not as though the stratosphere is absolutely pristine. But you don’t want to have people going off and doing things that involve large radioactive forgings, or programs that go on for extended periods or for that matter provide lots of reactive surfaces that could result in significant ozone destruction.” – (taken from the first film cited at end of article)
M. Granger Morgan, Carnegie Mellon University, University and Lord Chair Professor of Engineering and Public Policy, National Academy of Sciences Member “In addition to specific research programs sponsored by Federal agencies, there are other functions related to weather modification which are performed in several places in the executive branch. Various federal advisory panels and committees and their staffs – established to conduct in-depth studies and prepare reports, to provide advice or recommendations, or to coordinate weather modification programs – have been housed and supported within executive departments, agencies, or offices.” (1)

These programs are conduced by the department of defense, which means they remain classified, and why so many scientists and meteorologists don’t say anything about it. At the same time, all it really takes is observation.

If you are a constant observer of the skies, as I am, it’s not hard to see that something is already going on. After a day of spraying, the trails don’t evaporate, they spread out and block the sun.

“Global dimming is another term people aren’t familiar with, 20 % of the Suns rays are not hitting the Earth. That means there’s a lot of metal up there” – Dane Wigington

Concerns have been voiced for years, by various individuals from all over the world. For example, Rosalind Peterson, president and Co-Founder of the Agriculture Defense Coalition (ADC), and x United States Department of Agriculture (USDA) employee stated at a 2007 United Nations hearing on global warming that:

“One of the things that’s affected by climate change is agriculture, but some of what we are seeing is man made, but man made in a different way than what you may guess. Weather modification programs, experimental ones done by private companies, the US government, are underway and there are more than 50 operations underway across the United States. All of these impact agriculture because they change the micro-climates needed for agriculture to survive. None of these programs are done with oversight. International corporations are modifying our weather all the time, and modifying it in ways that cover thousands and thousands of square miles. Most of it is chemically altered, so what happens is that we are putting ground based chemicals that are shot into the air that change and modify our weather.”

You can read more, and view that full hearing here.

Geoengineering and chemtrails are a huge issue, and when talking about climate and environmental degradation, it’s something that must be mentioned, the fact that it’s not is very suspicious, given the fact that they’ve been spraying for and modifying our climate for so long.

Dane Wigington has an extensive background in solar energy. He is a former employee of Bechtel Power Corp. and was a licensed contractor in California and Arizona. He is the lead researcher for www.geoengineeringwatch.org and has investigated all levels of geo engineering from chemtrails to HAARP. He assisted Michael Murphy with his production of “What in the World are They Spraying” and has appeared on an extensive number of interviews to explain the environmental dangers we face on a global level.

What In The World Are They Spraying? (Full Length)

Why In The World Are They Spraying? (Full Length)

Obtained from the National Archives. A United States government document printed at the request of the United States Senate Committee on Commerce, Science and Transportation in November 1978.

Obtained from the NASA archives, a document prepared for the Interdepartmental Committee For Atmospheric Sciences. Prepared by Homer E. Newell, a mathematics professor and author who became a powerful United States government science administrator—eventually rising to the number three position at the National Aeronautics and Space Administration (NASA), in the early 1960s.

A history of weather modification programs prepared by Dr. Vermeeren, Professor At The Delft University of Technology, faculty of industrial design engineering. It’s a 300-page scientific report entitled, “CASE ORANGE: Contrail Science, Its Impact on Climate and Weather Manipulation Programs Conducted by the United States and Its Allies.” It was prepared for the Belfort Group by a team of scientists but presented anonymously. It was sent to embassies, news organizations and interested groups around the world “to force public debate.”

In 2009, researchers published “Modification of Cirrus clouds to reduce global warming,” which proposed two methods of delivery for this same proportion of metallics to silica and the same staying power of one to two weeks. The report notes that “the proposed scenario by the IPCC [Intergovernmental Panel on Climate Change] in 2001 is identical to the claims” in Hughes Aircraft’s 1991 patent. Hughes was acquired by Raytheon, a private defense contractor, in 1997, “the same company that acquired E-systems and the HAARP contract.”

The above referred to patent is linked within the article.

A 1996 report by top military personnel in the U.S., “Weather as a Force Multiplier: Owning the Weather in 2025” to evidentiary details (like governmental spraying schedules, chemical orders, correct nomenclature used in airline operating manuals, and calls for geoengineering by economists) to support its notion of “heavy involvement of governments at the top level in climate control projects.”

In 2007, the World Meteorological Organization (WMO) published a statement that included “Guidelines for the Planning of Weather Modification Activities.” Acknowledging that the modern technology of weather modification began in the 1940s, it is still “an emerging technology.”