Another reason not to live in Florida comes today from NBC Jacksonville (source):  Neighbors in a Jacksonville Beach community said they’re being terrorized by an owl.

A woman was taken to the hospital Wednesday after the owl swooped down and bit her on the head twice, they said.

Neighbors said the woman had some serious wounds to her head and was bleeding badly. There’s no official word on the woman’s condition.

Luann Vince said she heard her scream and ran to help.

“I realized then that the woman had been attacked by the owl because she was bleeding,” Vince said. “I ran over and tried to calm her down. Blood was just dripping and she said it attacked her twice. She had lost her glasses. I said I’d go get them. She said, ‘No.’ She was afraid since the owl was up there, she was afraid it was going to attack me.” Neighbors on Grande Boulevard near Jacksonville Drive and Butler Boulevard say they’re very concerned because this is the sixth attack in a few weeks. They say they want something done about the owl, which appears to be attacking at random, even during the day.

“All of a sudden the owl turned its head and came down on my wife. But by then, my daughter was already attacked,” said Forte.

“It got her eye; they thought it was punctured,” Forte said. “There were two puncture marks, but they said it didn’t puncture. It just scratched. It missed the cornea and the iris.”

Local bird rescue worker Cindy Mosling, the director of BEAKS, said she believes the owl was raised in captivity and likely just wants to be fed. 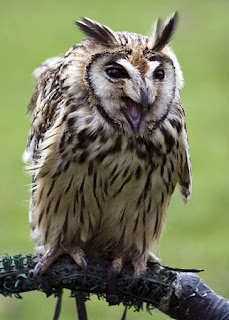 Her fear is that someone could hurt the owl.

Until something is done, neighbors say they’re keeping a close eye out. “They all have little kids. I’m a little scared now,” Vince said. “That really scared the heck out of me. It really did.”

The neighbors said they hope the owl is captured and taken somewhere safe, like the zoo. Mosling said she plans to come out to the area this weekend and begin that process.