According to an article in Yahoo! News, President Obama will be announcing his “go-it-alone” immigration plan on Thursday.  The article states:  President Barack Obama will outline a plan on Thursday to relax U.S. immigration policy and grant relief from deportation to as many as 5 million undocumented immigrants in a go-it-alone move that will deepen a partisan divide with Republicans.

The White House said Obama will deliver a televised speech on Thursday night laying out the plan followed by a trip to Las Vegas on Friday to build support. Nevada is home to the highest proportion of undocumented immigrants in the country.

Frustrated by years of congressional inaction on what most in Washington agree is a broken immigration system, Obama said in a web video posting that he is now prepared to act unilaterally.

“So what I’m going to be laying out is the things that I can do with my lawful authority as president to make the system work better even as I continue to work with Congress and encourage them to get a bipartisan, comprehensive bill that can solve the entire problem,” he said. Some conservative Republicans have threatened to fight the immigration move by imposing funding restrictions in a must-pass spending bill, which could conceivably lead to a government shutdown. Republican leaders, however, have stressed they will not allow a shutdown after facing heavy criticism for the last one a year ago.

Obama’s executive orders are expected to remove the threat of deportation for as many as 5 million of the estimated 11 million people living illegally in the United States. This is a significant step for a president known for having deported thousands of illegal migrants.

Sources close to the administration said Obama is planning to issue a reprieve from deportation that will cover some parents of U.S. citizens and legal permanent residents.

That initiative would expand on a 2012 executive order by the president that gave relief from deportation and work permits to undocumented children brought to the United States by their parents.

There is also expected to be a border security element and Obama will act to help companies hire and retain high-skilled workers from abroad, the sources said.

“We’ve identified a number of ways that we will (fix the system) which the president will speak to in the coming days,” Homeland Security Secretary Jeh Johnson said at a National Press Club event on Wednesday.

Obama’s move, coming little more than two weeks after elections in which Republicans seized the Senate, is certain to provoke a backlash and House of Representatives Republicans are weighing a range of responses. Michael Steel, a spokesman for House Speaker John Boehner, said in a statement: “If ‘Emperor Obama’ ignores the American people and announces an amnesty plan that he himself has said over and over again exceeds his constitutional authority, he will cement his legacy of lawlessness and ruin the chances for congressional action on this issue and many others.”

Republican Senator Mitch McConnell of Kentucky, who will become Senate majority leader when Republicans command the Senate in January, has warned that Obama will poison the well for future cooperation if he acts unilaterally.

The White House hopes that by acting now, Obama will spur House Republicans into acting on long-stalled immigration legislation, an idea that many on Capitol Hill see as far-fetched. 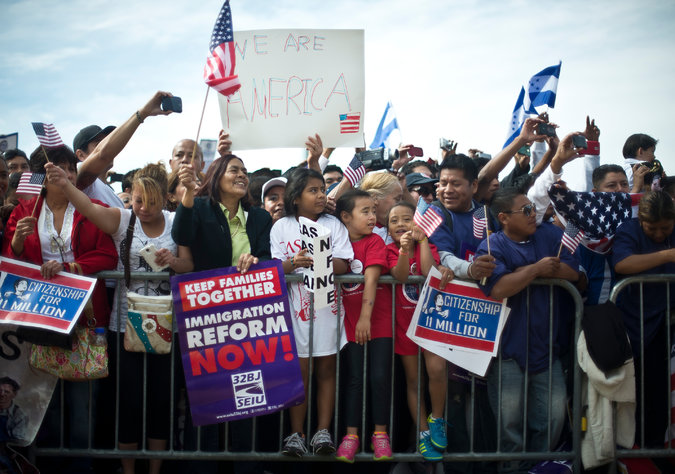 It is not out of the question that Obama early next year could offer to approve the long-stalled Keystone XL pipeline from Canada in exchange for a deal on immigration legislation.

The president on Wednesday night will host 18 congressional Democrats at the White House to talk through his immigration action, White House spokesman Josh Earnest said.

Obama’s move could potentially have the unintended effect of increasing illegal immigration along the U.S. southern border with Mexico, if it is perceived as a softening of U.S. policy toward future migrants.

Homeland Security’s Johnson said on Wednesday he was concerned about another rise in illegal immigration, citing seasonal increases and a recovering U.S. economy. He also cited the influx of Central American child immigrants earlier this year and said U.S. officials need to retain safeguards against a repeat of that.

The migrant crisis last summer contributed to some ill feelings among Americans about undocumented migrants. A Reuters/Ipsos opinion poll in August found that 70 percent of Americans believed immigrants threatened the country’s beliefs while 63 percent believed they burdened the economy.