Yahoo! News put out a fairly disturbing article via AP today (source) which discusses the US’s failing Nuclear system:  The foundation of America’s nuclear arsenal is fractured, and the government has no clear plan to repair it.

The cracks appear not just in the military forces equipped with nuclear weapons but also in the civilian bureaucracy that controls them, justifies their cost, plans their future and is responsible for explaining a defense policy that says nuclear weapons are at once essential and excessive.

It’s not clear that the government recognizes the full scope of the problem, which has wormed its way to the core of the nuclear weapons business without disturbing bureaucracies fixated on defending their own turf. Nor has it aroused the public, which may think nuclear weapons are relics of the past, if it thinks about them at all.

This is not mainly about the safety of today’s weapons, although the Air Force’s nuclear missile corps has suffered failures in discipline, training, morale and leadership over the past two years. Just last week the Air Force fired nuclear commanders at two of its three missile bases for misconduct and disciplined a third commander.

Rather, this is about a broader problem: The erosion of the government’s ability to manage and sustain its nuclear “enterprise,” the intricate network of machines, brains and organizations that enables America to call itself a nuclear superpower. What have been slipping are certain key building blocks — technical expertise, modern facilities and executive oversight on the civilian side, and discipline, morale and accountability on the military side.

The shortfalls are compounded by tight budgets and what experts call a decline in political support for the nuclear system. In the absence of a headline-grabbing nuclear accident in recent decades and receding fears of nuclear war, these problems generally are paid little heed.

The scientific and military capability is arguably the best in the world, but its underpinnings have weakened gradually.

The White House and Congress have paid little attention, allowing the responsible government agencies to “muddle through,” according to a congressional advisory panel. This is the case despite the fact that the U.S. still has thousands of nuclear weapons — more than it says it needs — and is approaching decision points on investing enormous sums to keep the arsenal viable for future generations.

“This lack of attention has resulted in public confusion, congressional distrust and a serious erosion of advocacy, expertise and proficiency in the sustainment” of the nation’s nuclear weapons capabilities, the panel on “Governance of the Nuclear Security Enterprise” said in a report in April that is expected to be updated soon.

The panel was led by retired Adm. Richard Mies, a former commander of U.S. Strategic Command, in charge of all U.S. nuclear forces, and Norman Augustine, a retired chairman of Lockheed Martin Corp. 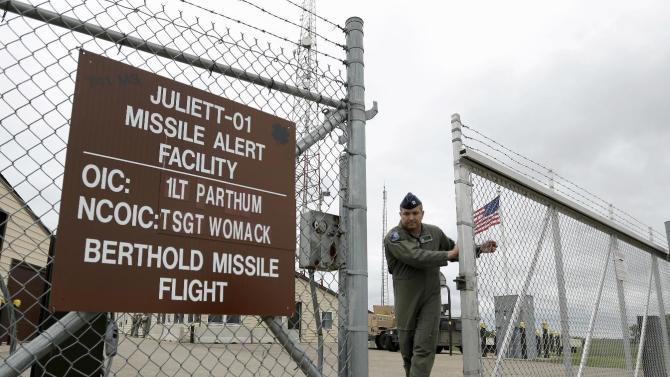 Nuclear weapons, the panel said, have been “orphaned” by Washington. Although today’s weapons are technologically sound, “there is no affordable, executable (government) vision, plan or program for the future of nuclear weapons capabilities.”

The atrophy gets little public notice because it’s largely hidden.

Some aspects of the problem will emerge with the expected release this month of an in-depth study of “gaps or deficiencies” in the nuclear force that Defense Secretary Chuck Hagel ordered in February. He also asked for immediate and long-term solutions after declaring in January that “something is wrong” in the nuclear force.

Hagel acted in response to a series of Associated Press stories detailing failed nuclear security inspections, leadership lapses, training gaps and morale problems in the nuclear Air Force. The Navy has since disclosed that a cheating ring operated undetected for at least seven years at a nuclear power training site and that at least 34 sailors were being kicked out for their roles in the long-hidden misconduct.

But the problem goes beyond the military and Hagel’s responsibility for nuclear weapons. It extends to the National Nuclear Security Administration (NNSA). This office within the Energy Department is in charge of ensuring that nuclear warheads attached to Navy and Air Force missiles and bombs — as well as those in storage — are safe and work properly.

It also administers a network of nuclear weapons plants and nuclear laboratories.

The government splits nuclear management responsibilities between agencies. The Energy Department, through the NNSA, develops, produces and maintains nuclear weapons as well as dismantles and disposes of those that are retired. The Defense Department sets weapons requirements and operates them in the field.

Augustine told Congress last April that the NNSA “is on a trajectory toward crisis,” having “lost credibility and the trust of the national leadership (and the Pentagon) that it deliver needed weapons and nuclear facilities on schedule and on budget.”

Frank Klotz, the head of the NNSA and a former commander of the nuclear Air Force, says his agency is taking steps to fix its shortcomings. He believes its management of the nuclear weapons stockpile is a “phenomenal achievement,” considering it has not conducted an underground nuclear test for more than 20 years.

In an interview with reporters Oct. 29, Klotz did not dispute that the government has allowed cracks to form in the civilian and military underpinnings of its nuclear weapons complex.

“My generation came of age in the Cold War, when nuclear deterrence and the nuclear deterrent force were center stage,” he said. “At the end of the Cold War it was almost as if we had all heaved a sigh of collective relief and said, ‘Thank goodness we don’t have to worry about that anymore.’ … Quite frankly, we lost focus.”

The nuclear weapons laboratories say they have been losing ground and fear for the future.

Charles F. McMillan, director of the Los Alamos National Laboratory, told a Senate panel in April that the country is spending too little on the science, technology and engineering base that supports the nuclear program.

Congress is supposed to oversee both the military and civilian sides of the nuclear enterprise, but it has shown limited interest in addressing the problems. The most vocal lawmakers on nuclear weapons issues are usually those seeking to protect home-state interests — nuclear missile bases, nuclear weapons labs and the like.

Those who see nuclear weapons as a necessary deterrent to attack from other nuclear-armed countries worry about the looming obsolescence of the current Cold War-era arsenal and about the jaw-dropping cost, of up to $1 trillion, of replacing it with a new generation of weapons and their support systems.

“Unaffordable,” is the blunt conclusion by a panel of defense experts who reviewed the Pentagon latest defense plan.

John Hamre, president of the Center for Strategic and International Studies and a former deputy defense secretary, says post-Cold War decisions that downgraded nuclear weapons as a national priority may come back to haunt the U.S., in light of efforts by several countries to expand or begin building nuclear arsenals.

“It was always the backdrop of the competition with the Soviet Union that undergirded the nuclear enterprise. Now the Russians are coming back, the Chinese are expanding their inventory, and we are on the rim of a potential cascade of nuclear weapon states,” Hamre said. “But the American establishment is in serious decline.”